Online shop is open for delivery across Canada. Order before Dec. 17 for holiday order deliveries.

Ever wonder about our chocolate Valentine traditions?

Valentine’s Day is one of those holidays with murky origins.  I did a little Internet sleuthing on a few credible sites, like the Smithsonian and History and learned that it wasn’t until the 1800s that both the technology required to produce really good chocolates and the broad appeal of acknowledging your sweetheart with symbols of your affection, that chocolate become intricately linked to the international day of sweethearts. Because when you think about it, chocolate was and still is today, a sought-after treat made with rare ingredients.  There’s no better way to express a rare affection for that someone special. Back then, cupids, lace and anything heart-shaped won the day as a sign of affection.

Today, while cupid still makes an appearance on cards and in ads, a study last year by MasterCard in the United States indicates that Americans consider food the most important aspect of a successful Valentine’s Day celebration.

And in Japan, while food is important to the celebration too, there is a strong tradition of women giving chocolates to men on Valentines Day.

I think it was Charles M. Schulz who once famously said, “All you need is love. But a little chocolate now and then doesn't hurt.” I have to agree.  Happy Valentine’s Day to everyone celebrating love with their soul mate, their family or their besties. And don’t forget to indulge in a little fine chocolate too. 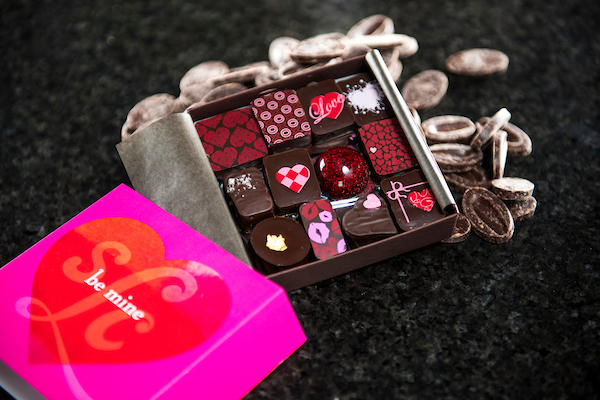 American Express lists us among the best in the world

This month, American Express covered the world of fine chocolate in their gorgeous online magazine, Amex Essentials. Each month, the magazine presents a selection of the most original travel and lifestyle trends and ideas around the world.

Their dive into the best artisanal chocolate around the world was intent on finding chocolatiers who were passionate about giving people that perfect chocolate moment using the finest cocoa and lots of finesse. We were delighted to be on that list -- and the only Canadian chocolatier to be recognized.

Sometimes its easy to think that the good work you do in a niche market can only be recognized or successful on the stages the world is most familiar with -- stages in New York or the world's chocolate hub of Paris. It's exciting for us to see that no matter where you hang your chef's apron, there are appreciative audiences.  And if you're doing things right and truly passionate about your craft, the fact that your stage is in a remote part of the world doesn't really matter.

For all of you who appreciate our work, thank you! You inspire us to do more of it, and better, each day.

You can see the full article here: https://www.amexessentials.com/worlds-best-artisanal-chocolates/

October is something like the Olympics for small and large chocolatiers working with fine chocolate from across the globe who compete for coveted medals in the International Chocolate Awards.

After some success previously winning awards in this competition, we decided to put a few of our chocolates before the judges again this year. We picked seven bonbons we thought would stand up well and were...

This month, as students close one chapter and graduate to another level of learning, and as we celebrate one of the greatest mentors in our life – our dad, I thought it would be interesting to share an inspiring experience I had recently with one of my own mentors and teachers.

When you work hard to be the very best you can be at your craft, I find it’s inspiring to look at the people who have moved the needle in new and interesting ways, to drive your own creativity and skill forward.

In April, I had the chance to be a part of a small, intimate gathering of chocolate and pastry professionals from across North America who had met up in Brooklyn to get insights and perspective from French pastry chef, Pierre Herme.

If you’re not familiar with Pierre, he began his career at the tender age of 14 (which is something that really does happen in France) as an apprentice to the master, Gaston Lenôtre. He now has a successful enterprise of chocolate and pastry boutiques in 12 countries around the world.  He’s been called the Picasso of Pastry and the inventor of the Pâtisserie Haute Couture concept, but I like to think of him simply as the father of modern pastry and chocolate.  But what I learned in Brooklyn is that he is someone who relentlessly pushes himself to be better and more innovative all the time.

Pierre generously shared details about his journey to open the very first Pierre Herme boutique, in Japan not France, and his pursuit of new flavour pairings and techniques to satisfy his curiosity and keep his tastebuds tantalized.  One thing that struck me during our time together is that he seems genuinely interested and curious about everything, and just about anything inspires him.  He has a very sophisticated palate, which helps him imagine unusual ingredient pairings, which he admits over the years have taken more than a thousand recipes to master.

That’s something I can relate to because I’m always tinkering with my recipes to continuously refine them. Pierre shared a story about his now best selling cake, the Ispahan, which is a delicious harmony of rose-flavoured almond cake, raspberry and lychee. In Brooklyn, Pierre admitted that he originally developed the recipe with just rose and raspberry notes.  The cakes weren’t popular and his team pressured him to take it off the menu year after year.  The interesting part of the story is that Pierre said he could always see and taste the potential for this cake and refused to drop it from the line up.  He refused to measure success through sales.  He said that sometimes you have to imagine what isn’t there today and bring your community of customers along the journey with you. After years (yes, years) of tinkering with the recipe, he finally added a hint of lychee and today it’s consistently one of the top five selling products in his boutiques.

For me to hear that someone, who is considered at the pinnacle of his career, struggles and fails and doggedly pursues perfection…well it just leaves me with a renewed sense of purpose, focus and inspiration.

So for the graduates moving on, the dads imparting words of wisdom and everyone who has a few impromptu moments to mentor, don’t forget that everyone is always learning and growing.  The brave find new ideas and inspiration in their failures and stick with the journey for the long haul.

Chocolate is good for your mood and good food

Chocolate is the ultimate comfort food – a sure-fire stress reliever, pick-me-upper and taste bud tantalizer. But did you know, it’s actually good for your health in other ways beyond your mood?

Real scientists from around the world (yup –people with authentic lab coats) have been studying this gift from Mother Nature and they’re consistently discovering a long and growing list of health benefits.  A one-off study by a junior college could easily be dismissed, but hundreds of studies conducted at some of the most prestigious universities around the globe indicates there is more to these claims than wishful thinking.

But the trick seems to be, you get more of the health benefits when you eat the good stuff – high quality dark chocolate with a cocoa percentage of about 70 per cent, made fresh, without all the unhealthy additives that mass manufacturers include to keep it stable on the shelf for months.  Just like the chocolate we carefully source and craft at Sweet Lollapalooza Fine Chocolate.

Neuroscientist Will Clower, Ph.D says in his book Eat Chocolate, Lose Weight that a small square of good chocolate (again, it’s got to be the good stuff) melted on the tongue 20 minutes before a meal triggers the hormones in the brain to say “I’m full”, which can help you cut the amount of food you eat. If you end a meal with the same small trigger, you could reduce your risk of late-night snacking.  Who couldn’t use a little help like that this time of year?

Dozens of credible research studies have so far uncovered that good chocolate is good for the heart, circulation and brain, and it may help improve a few of our common heath challenges like obesity, diabetes and dementia.

In just one of these studies, Professor Phyo Myint, Chair in Old Age Medicine at Aberdeen University, remarked "Cumulative evidence suggests that higher chocolate intake is associated with a lower risk of future cardiovascular events.”

Chocolate can ward off the winter blues because it contains phenylethylamine (PEA), which is the same chemical that your brain creates when you feel like you’re falling in love – the feel-good endorphins.  It can also be good for the soul when you source chocolate crafted with love, from materials grown with care by farmers rewarded properly. It won’t be fast and it may not be cheap, but it will be good for your heart and soul.

With all research studies, a long-term effort is needed to understand the full picture.  But the early investigations are promising. All the credible scientists stress that we can all reduce our risk of health issues like stroke by exercising regularly, eating a healthful, balanced diet and getting our blood pressure checked.  But it certainly seems that eating some fine dark chocolate couldn’t hurt, and probably helps too.  Good news and a good resolution to kick off 2016 – eat more good chocolate.